Introduction to Docker, with a Nodejs Demo 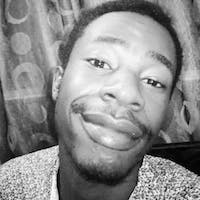 The process of developing applications involves more than just writing code. Beyond selecting what language or framework to use, other factors come into play― development environment, dependencies, architecture, etc. If these factors are not taken into consideration, building and deploying a product could be painful.

Docker is a development tool that allows a developer to package all the dependencies, libraries, and possible configurations into a single package that can either be shared as an image (Docker image) or deployed as an instance called a container (Docker container).

In a team of developers, each individual could have different operating systems which could affect how a package behaves. In a project with multiple stack components, each component could require different versions of the same dependency package. The development environment (operating system), could be different from the production environment (operating system). Consistency can be very difficult to attain while developing a product. But with Docker’s ability to package dependencies, configurations, and other specifics into an isolated docker instance, the different components of a product can be configured separately, differences between development environments and production environments can be ignored, and the age-long excuse of “But it works on my laptop!” can be avoided.

To fully follow this article, and appreciate Docker better, it is important to understand some of the concepts.

Virtual machines are computers running on computers. The process that makes creating virtual machines possible is called virtualization. It is also the concept on which containerization (creating containers) is based.

Virtual machines have CPUs, memory, storage, operating systems, and the ability to run applications. But as the name implies, the hardware that makes up a virtual machine is not tangible. They are software-defined allocations from a larger pool of physical resources.

The diagram below represents how virtual machines can be visualized. 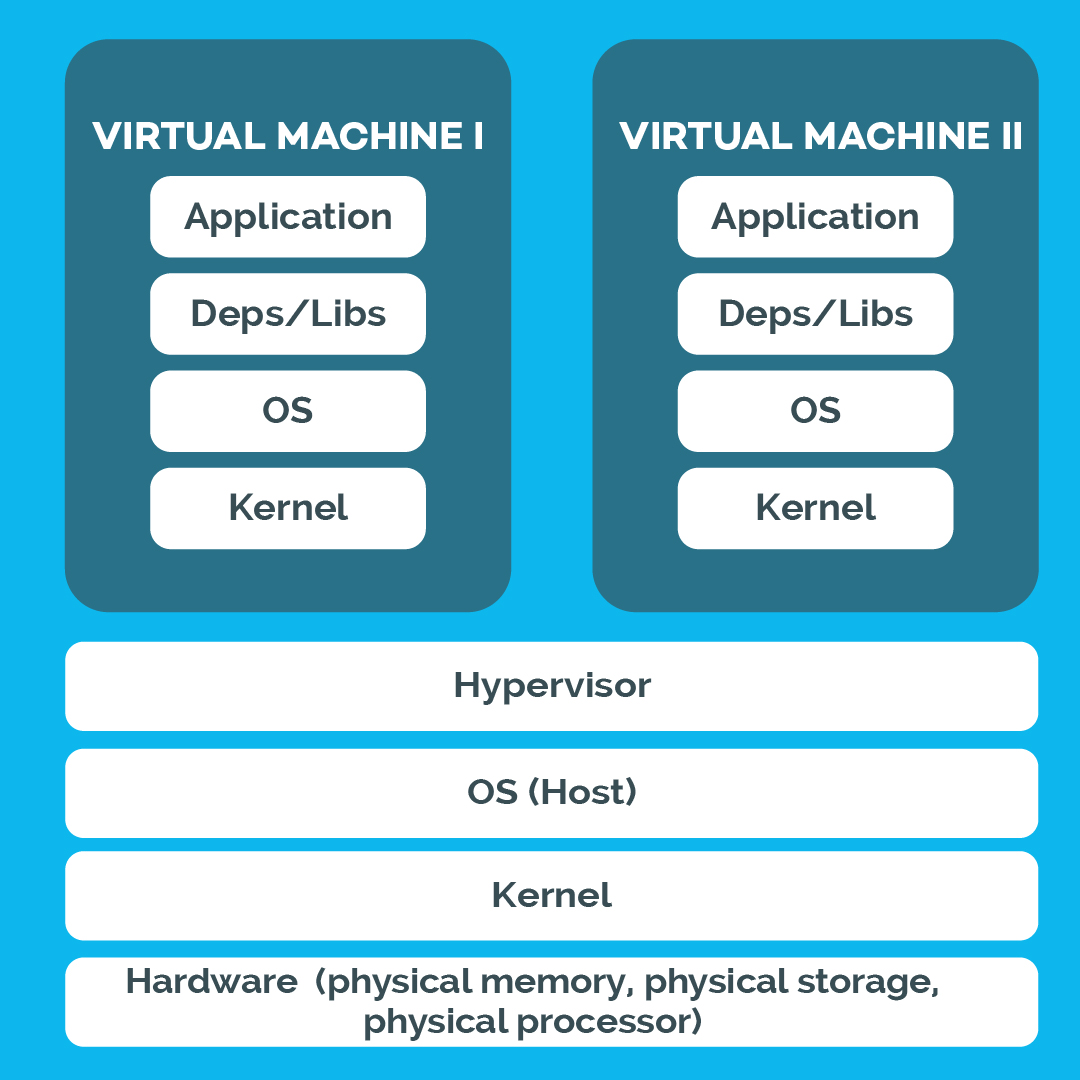 From the diagram, the host, which has access to all the physical resources (hardware), runs a software called a hypervisor. The hypervisor is responsible for creating and managing virtual machines. For every application to be run in its isolated environment, a new virtual machine has to be spun. This would have its operating system with its resources allocated to it, whether it is in use or not. This, depending on the reason for setting up the VM, could be wasteful in terms of resources.

Note: The Kernel is a piece of software that interfaces the OS with the hardware.

Containers, in a way, are similar to virtual machines. They can be used to provide an isolated environment of processes, services, network interfaces, with all the libraries and dependencies needed for an application to be developed, or deployed to run consistently on any platform. They are lightweight, portable, and fast. They can be used as either alternatives to or in addition to virtual machines.

The image below describes a docker container. 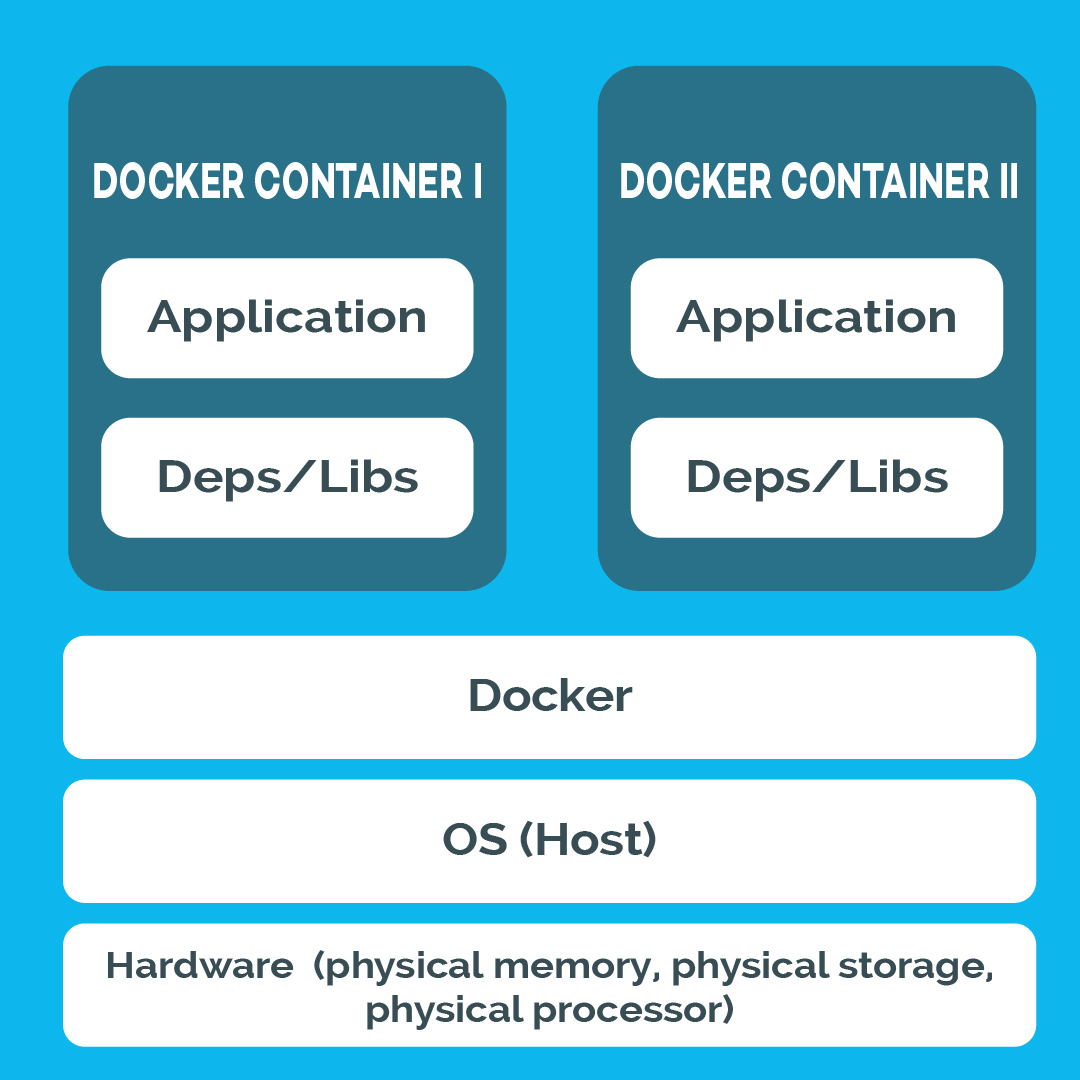 A Docker image is a template that contains the application code, libraries, configurations, and other dependencies that a Docker container would contain when it is created from a given image. A Docker image can also act as a base image on which more dependencies and code can be added to create another image.

Since it is simply a template, multiple instances (Docker containers) of the image can be created on a host machine.

Docker repositories are hosted as server-side applications and can be private or public. There are open-source Docker registries that can be customized if need be, and set up for use. Docker has an official docker registry called "Docker hub".

Docker hub is the official registry for Docker. It is the largest collection of Docker images. Docker Hub has official images curated by Docker that provide a reliable base from which Docker containers for a particular purpose can be created, or other docker images can be built upon.

Docker hub offers a lot of other features including creating private repositories. You’d have to sign up to enjoy full benefits.

A Dockerfile is a text document that contains the instructions needed to build an image. There are syntax and keywords needed to write a functional Dockerfile. We will be looking at some of them later in this article.

An application may require running multiple containers. Docker compose makes that possible. (While exploring “docker compose” is out of the scope of this article, it shall be covered in another article.)

Setting up Docker on Windows

In this section, we shall be going through the process of setting up Docker on Windows.

To use Docker on Windows, some requirements must be met.

Quick note: To run Linux-based docker containers on windows, a Linux virtual machine would be spun. The Docker containers will run on them. This is why we need the kernel.

To demonstrate how to use docker in this article, we shall be writing then dockerizing a Nodejs(express.js) server.

Create a folder in the working directory

First, you create a folder called “dockerapp” in whatever directory you are, and move into the folder directory as shown below. 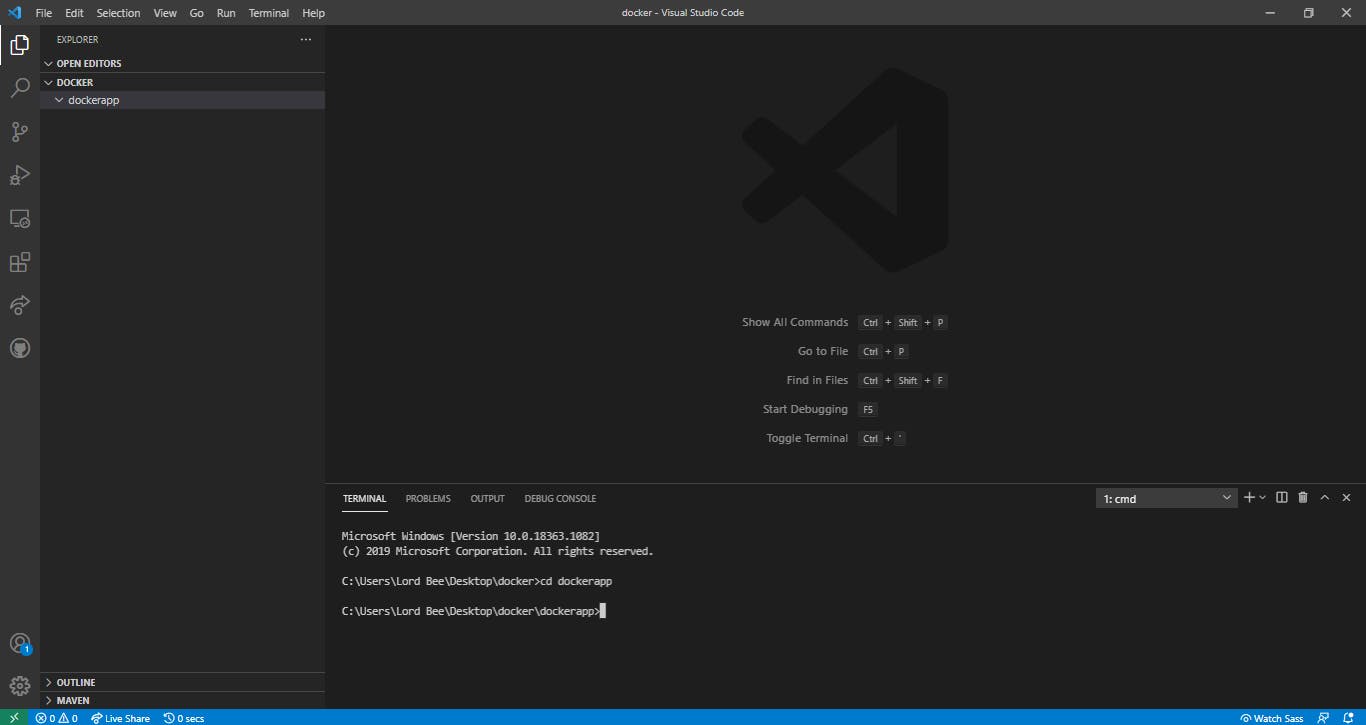 Initialize the package.json with the Node Package Manager(NPM)

This would contain the nodejs server information and list of dependencies. To do this, type the line below in your terminal: 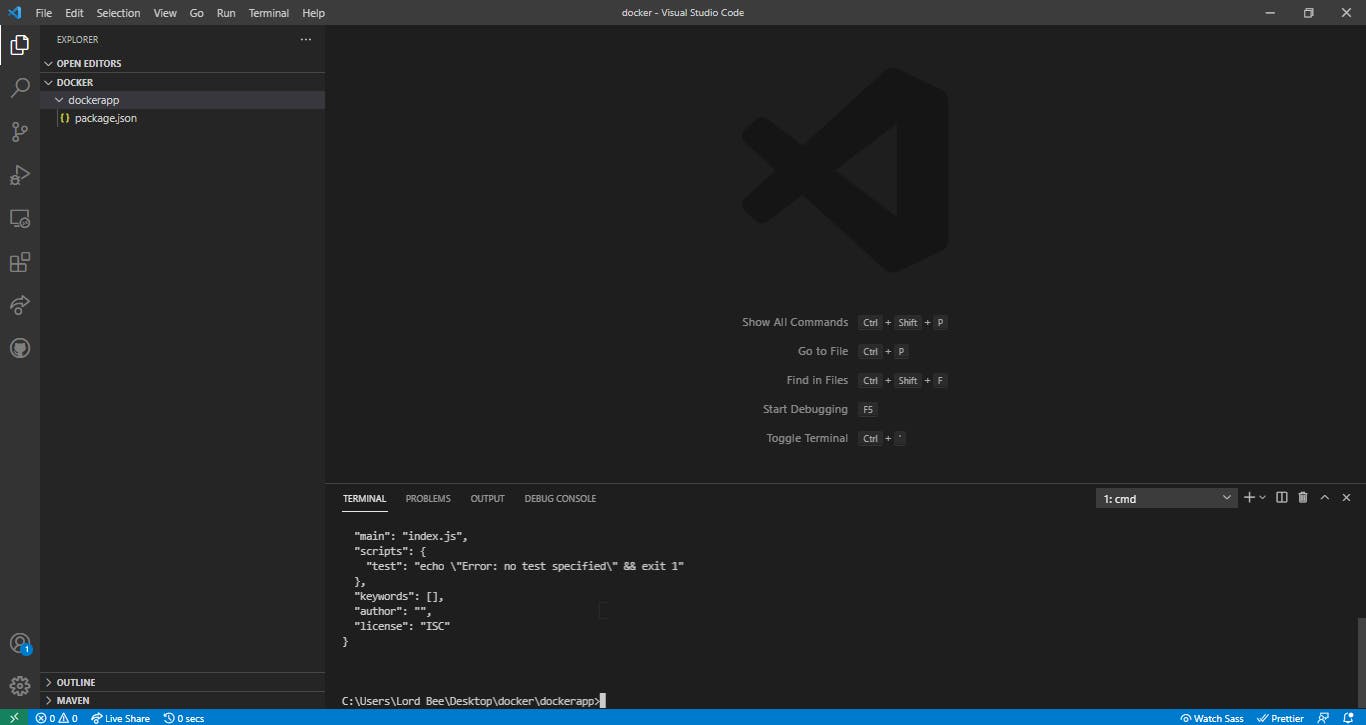 Next, we install the express.js framework that would be used to create our server.

Copy the code below into your terminal.

If the process was successful, your terminal would be similar to the one below

Write the Server side code

Now, we need to create the app.js file. You can copy the command below into your terminal:

The app.js file would contain our server code. Copy the following code into your file:

Your project directory should look something similar to the one below. 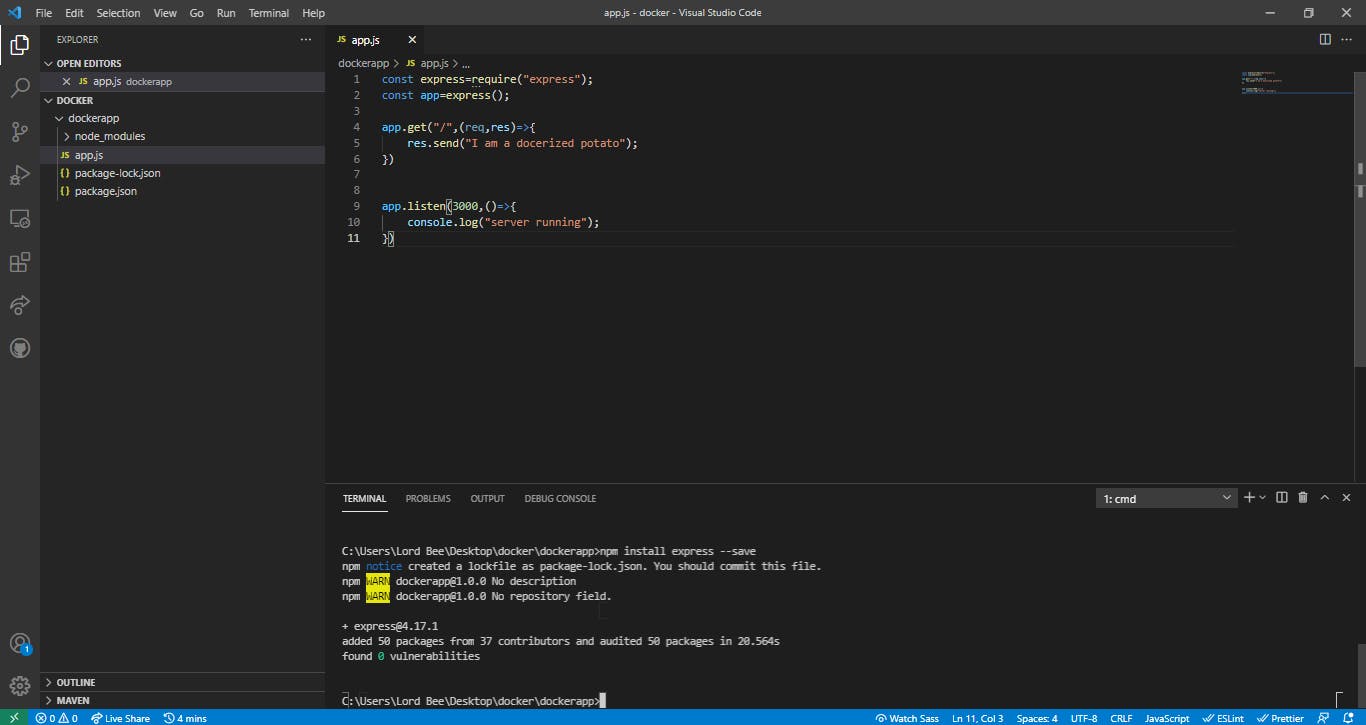 Add start script to the package.json

In the package.json file, add a start script that would start the server when run. It should be similar to the one below.

In dockerizing an application, the Dockerfile is very important. It contains all the instructions needed for Docker to build an image for the application, and create a container from it.

Change the directory (if need be)

The first step would be to move out of the dockerapp folder in your terminal to the working directory of the application.

If the working directory of the terminal is the dockerapp folder, you can move out of it by typing the code below in your terminal. 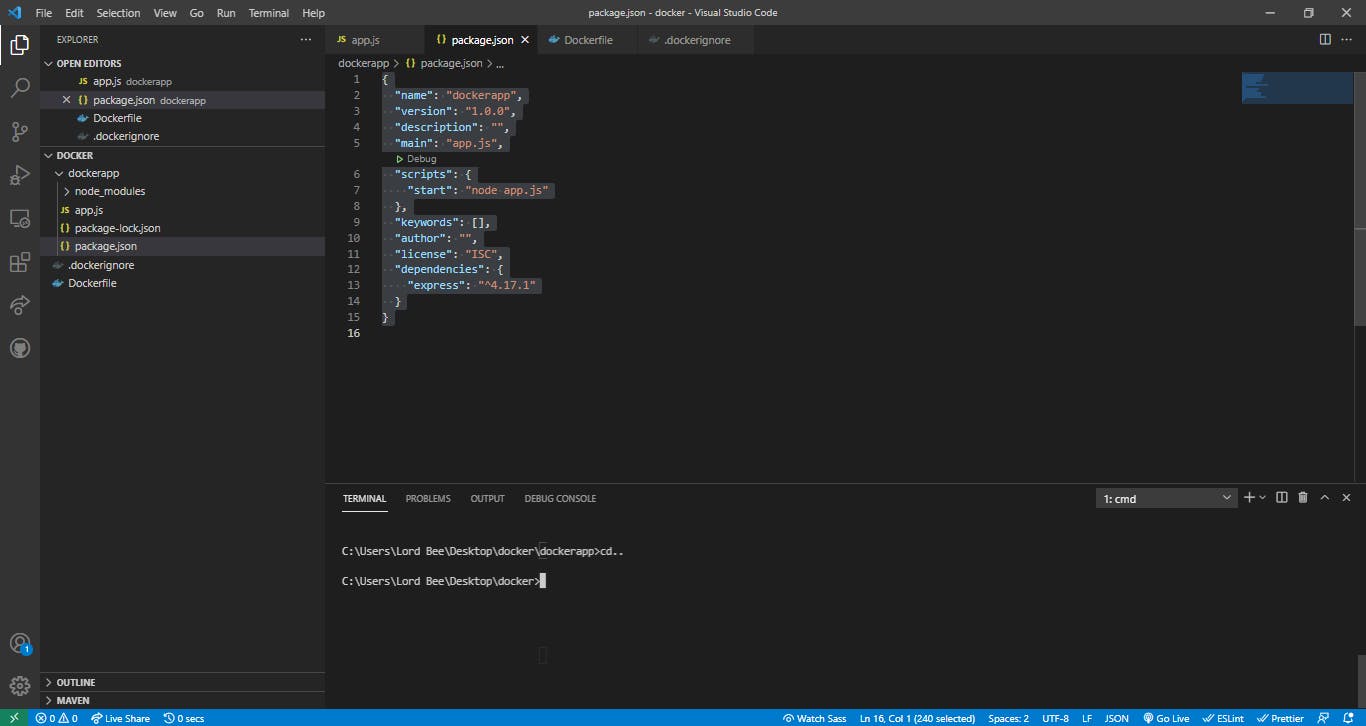 Next, we create the DockerFile in the directory. Copy the code below into the terminal.

In writing a Docker file, like any other computer-read document, there are keywords/commands, and syntax to be followed. In writing the Dockerfile to dockerize the node server created, some of these rules are explained.

Note: “#” is used to start a comment. These are lines of text that are ignored by docker. They can be used to explain other parts of the document.

Note: The Run and CMD commands are similar but not interchangeable. It is important to know which to use at the right time.The difference between them is their use. The instructions written in the RUN command run while building the image. It can be used multiple times. In this case, we are adding our dependencies with the “npm install” command. The CMD, on the other hand, specifies the command that should be run when a container is to be spun from an image. It can only be run once. If it appears more than once, only the last one would be executed.

The .dockerignore file is a file that specifies directories or files that should be ignored by docker while building an image. It is not compulsory, but in cases like this where we do not want to copy the node modules, it can be helpful to create the file. The file can be created by typing the below command in the terminal.

Inside the “.dockerignore” file, simply adding “node_modules” is enough in this case. 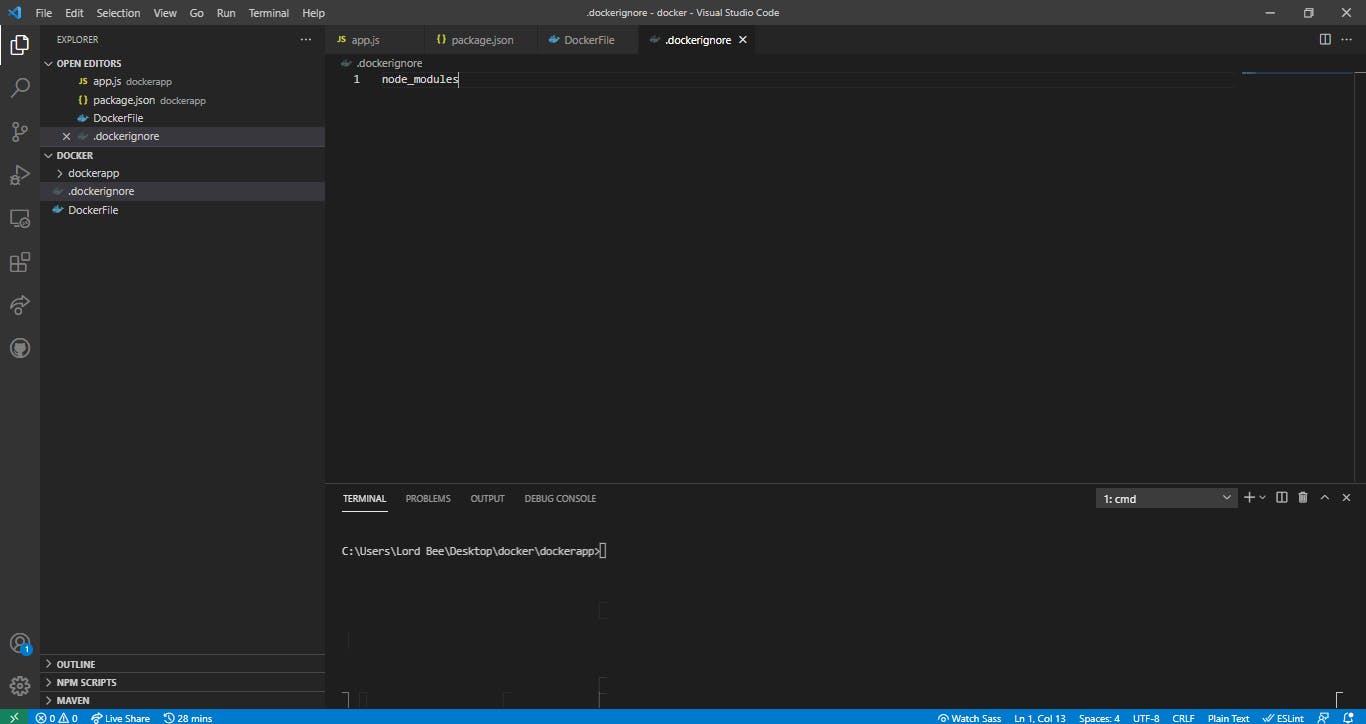 After writing the Dockerfile and the .dockerignore file, the next step is to build an image. The command below would build the image. Type it into your terminal.

The build command builds an image from the Dockerfile. The -t flag is used to name the image built. In this case, the name of the image would be dockerapp. It could be anything.

Building an image could take some time. 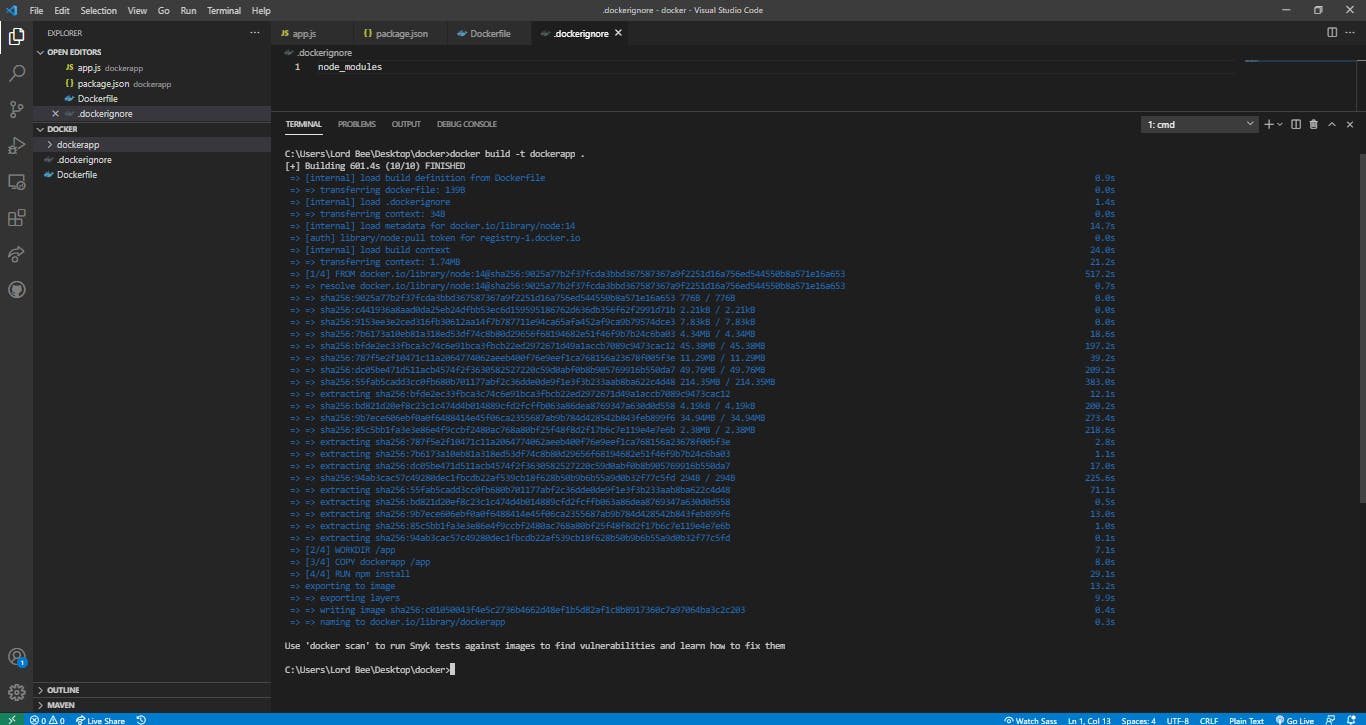 To check the images available locally, run the command below in the terminal:

The desktop application can also be used to check the local images. 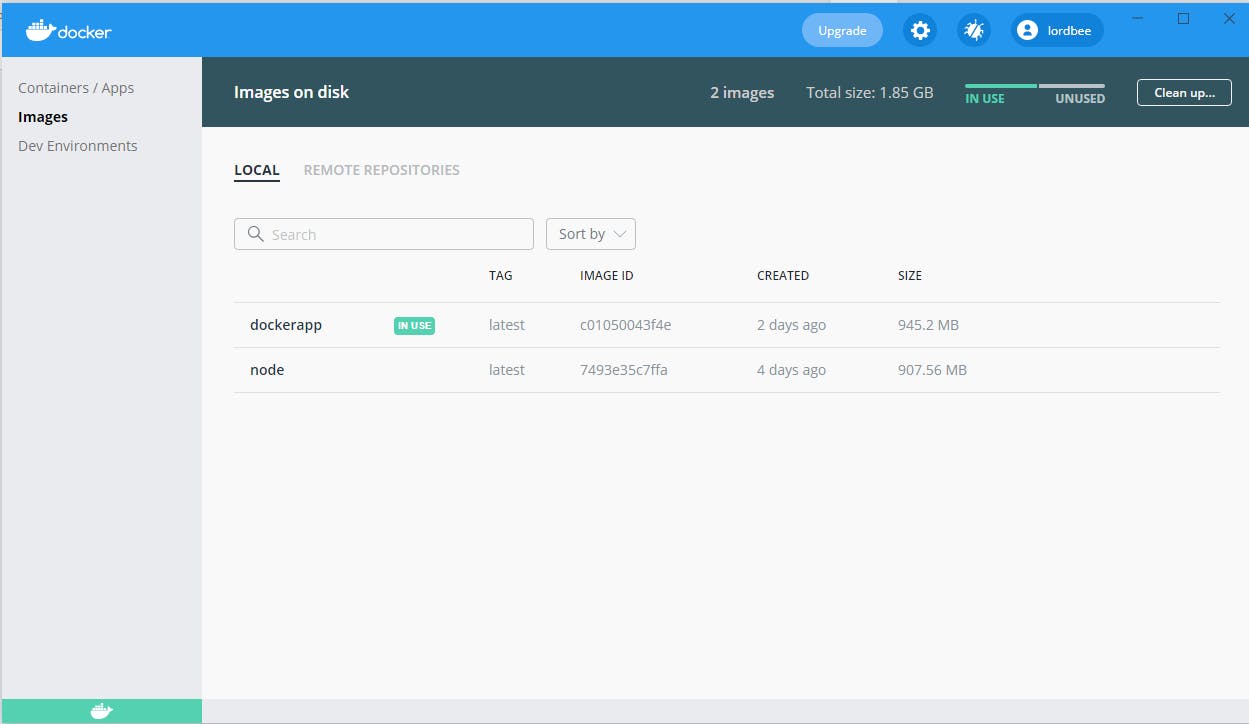 We can run a container by writing the command below in the terminal.

The docker run command initializes a docker container. The --name flag is used to assign a name to the container. The -p flag is used to map ports from the docker container, to the host on which it is running. In this case, we exposed the port 3000, so we would map it to the 3000 port of the local machine on which it is running. The syntax to use it is in this form:

The dockerport has to be a port that was exposed in the Dockerfile, but the hostport can be any free port on the host machine. Hence, it is possible to spin up multiple docker containers on the same host, but mapped to different ports. 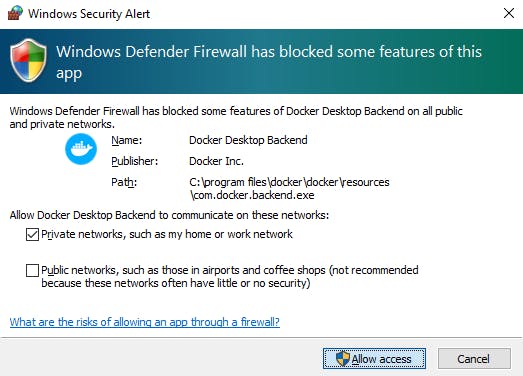 Visit localhost:3000 in your browser to make sure the docker container is indeed running. 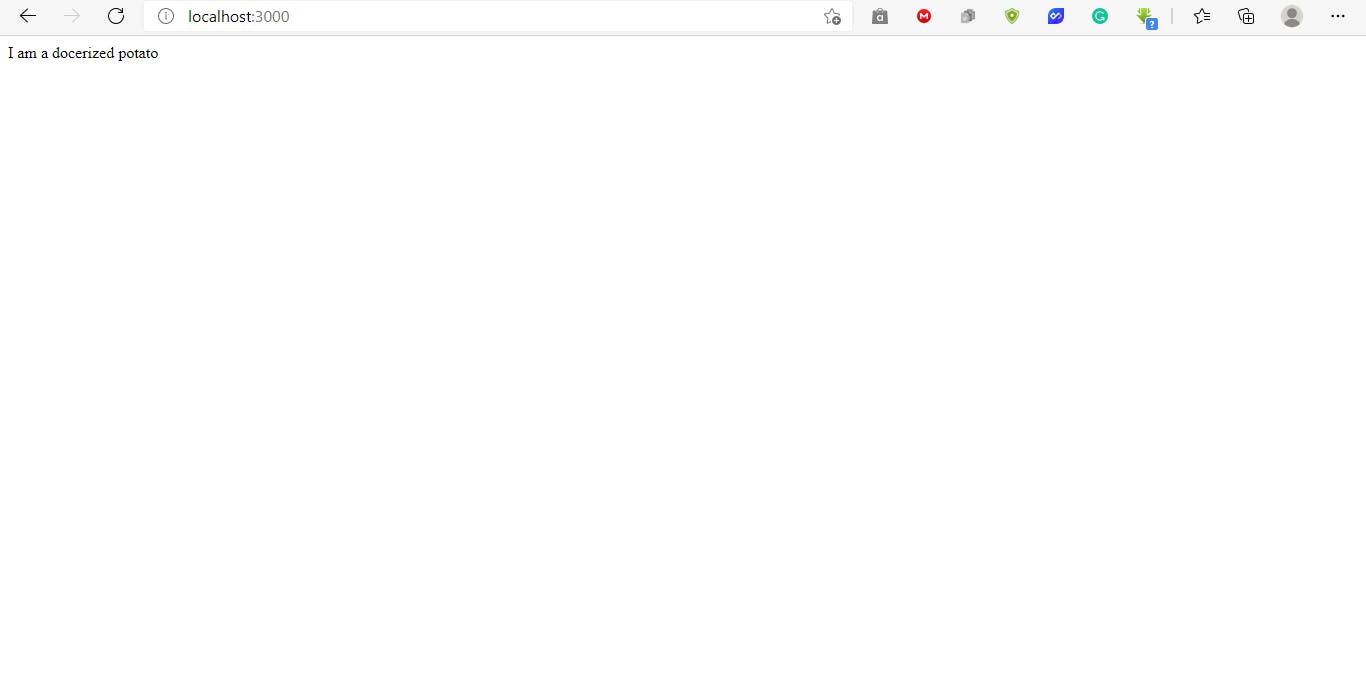 As stated earlier, it is possible to spin up multiple docker containers and map them to different ports of the host. Our second container would be generated with the line below in the terminal.

Visiting localhost:3001 in the browser would give:

To check the running containers, the docker command docker ps can be run in the terminal with appropriate flags. The flag -a is used to list all the containers, running or stopped.

The container ID is very important. It is needed to stop or start a container.

The desktop docker application can also be used to check the docker containers that are running. 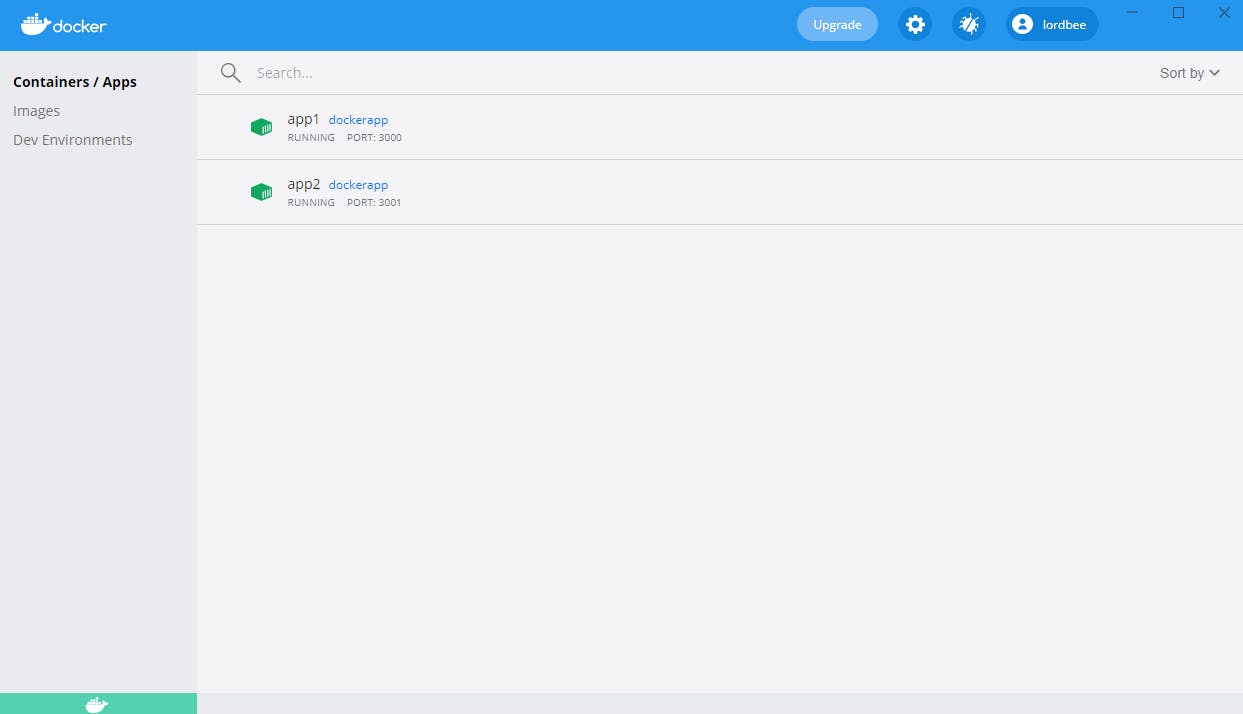 The docker stop command can be used to stop a container. It is in this format

The docker start command can be used to start a container. It is in this format:

The capability of creating multiple isolated containers while consuming minimal resources is a feature of Docker that makes it an essential tool in development. Most hosting platforms provide Docker deployment options. For those new to development, it’s never too early to get used to Docker, and I hope this article helps a bit.

To learn more about Docker, check out the official documentation here 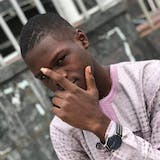 This article is fire. I've read different articles explaining docker but I would get lost at some point. This really helped. Thanks boss 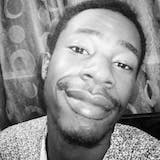 You're welcome. I'm happy I was able to help.